My Berlin: The District of Marzahn 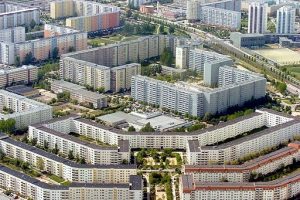 “Americans Don’t Live in Marzahn” – A quote from a neighbor as he heard our accent. It’s not that we are not welcome, we just stand out as “well off westerners” who typically do not call Marzahn home. We stand out as more of a curiosity. Berlin is often called “sexy, but poor”, while Marzahn is often just called poor. Marzahn has an unemployment rate of around 20% and the second highest rate of children dependent on government benefits at 45% with a majority of those households being led by single parents. Of the older retiree population, there is high rate of alcoholism and substance abuse without readily available treatment centers. 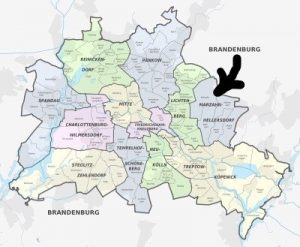 Marzahn is located at the Northeast fringe of the city and was mainly an agricultural community until the late 70’s. It was the first of three new districts that were founded in the GDR-period (formerly East Berlin). The 1973 ‘program to solve the housing question in the GDR’ initiated the beginning of the prefabricated housing estates. Between, 1976 and 1989, about 65,000 apartments in 5 to 20 story high-rise buildings were built in Marzahn. About 170,000 persons were to live in the new district, which equaled more than 10 percent of the East Berlin population. Our approximately 75-acre neighborhood currently has 4,500 apartments and has a population of about 12,000 people. If not for the fall of the Berlin Wall, Marzahn would have more than twice the number of apartment buildings than it does today.

After the fall of the Berlin Wall, Marzahn saw an exodus to the west side of Berlin. Until the recent migration of refugees to Berlin, Marzahn had a high vacancy rate. This led to lower rents which attracted retirees, young families needing more space and lower income residence. With the lower property rates the City of Berlin began to purchase property and establish Refugee Camps in Marzahn. There are currently 3 active camps, 1 camp under construction (nearing completion) and last year it was announced that a fifth camp would be constructed in our focus neighborhood. Neighborhoods (or kietz) are relatively small. Our neighborhood is 75 acres, but our flat is within 3 blocks of an active refugee camp and even closers to a camp that is under construction. 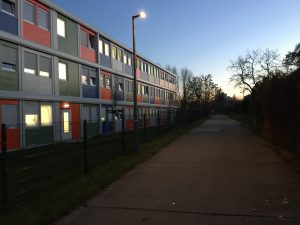 The population is anticipated to grow at about 15% primarily driven by refugees leaving the camps and establishing homes in the neighborhood. Once high vacancy rates have already dropped significantly as refugees move into the neighborhoods. After 1989, Marzahn had become known for neo-Nazis and “foreigners were warned not even to visit there”. Though things have changed racial tension remains as the refugee population approaches 4-5% of the overall population. The Church is small in Marzahn, which has hampered the ability to reach primarily Islamic populations of the refugee centers.

The Church in Marzahn is not only grappling with how to respond to the refugee influx, but is also trying to reach its neighborhood which is 90% atheist (many 2nd & 3rd generation) with less than 0.5% being born-again believers. When we first arrived there were only 9 registered Churches in our District (though it is hard to account for home Churches) including a state-run Church and several that are churches more by tradition than by actual belief. That number is now down to 8 with the closure of a local Baptist Church that once was very vibrant, but declined due to internal strife. We are praying for a further connection amongst local Churches and believing that where 2 or 3 are gathered God is in the midst.